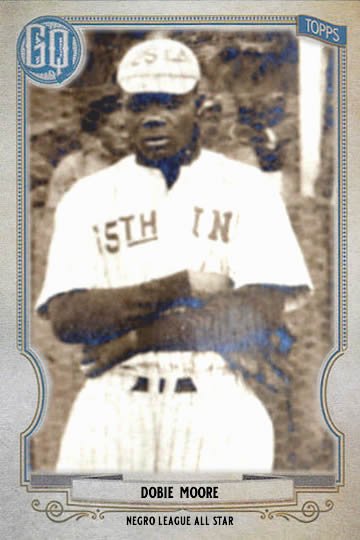 Taken from The Biographical Encyclopedia of the Negro Baseball Leagues

A great shortstop, Dobie Moore was a superb fielder with outstanding range with a terrific arm. He could go in the hole, make a diving, backhand stab, stand up, and, flat footed, throw the man out at first. An outstanding hitter, he hit for average and could also hit the long ball, with his best season coming in 1924, when he hit .453, led the league in doubles, and had 10 home runs and a .694 slugging percentage. The outspoken shortstop was not resistant to offer criticism of teammates, and sometimes this practice caused resentment.

In 1926 his brilliant career was cut short early in the season due to a shooting incident that disabled him while still in his prime. The incident was cloaked in an “air of mystery” as the parties involved told conflicting stories.

With his career prematurely terminated, he left behind a lifetime .365 average for his seven seasons in the Negro Leagues.

Dobie will bat leadoff and play shortstop for the Kansas City Monarchs in the Midwest Six League. He is expected to be near the top of the league in runs scored, hits, doubles and triples.

Dobie will counted on to get on base and set the table for the rest of the Monarchs lineup.